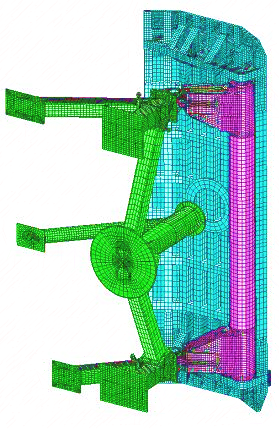 Structures are designed to withstand extreme loads, but when subjected to repeated applications of load, they can suffer from fatigue failure, under loads which are significantly lower than the extreme loads.

Fatigue cracks usually initiate on the surface of a component, where there is a stress concentration. Local geometric features are particularly important with regard to fatigue life, as they can cause high localised stresses to occur.

In addition, welded joints can be particularly prone to fatigue failures and will often limit the fatigue life of a component, as they will exhibit high tensile residual stresses if post-welding heat treatment is not undertaken.

Some of the benefits of performing a finite element analysis (FEA) based fatigue life calculation over physical testing are:

Eatec Engineering Analysis has experience of performing fatigue life calculations against a number of standards, including Eurocode 3, Eurocode 9, BS 7608 and various ASME standards.