Eatec Engineering Analysis undertakes a range of vibration analyses to satisfy different client requirements. These include:

Brief details of some projects are given below

Large skids used on offshore installations to support dynamic equipment are often mounted on isolators to minimise the noise and vibration transmitted into the support structure. In order to avoid excessive vibrations/noise or premature fatigue failure of the fabricated baseplate, it is important that the assembly does not posses natural frequencies which could be excited by the normal operational loads from the equipment.

These types of structure usually posses many modes within the operating 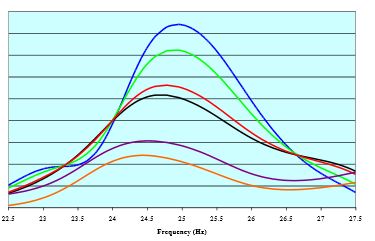 frequency range, and hence it is necessary to perform response calculations to identify which modes are excited and the amplitudes of the motions.

Many projects have been undertaken and usually follow the approach described here:

Investigation into the dynamics of a ballscrew actuator

Long stroke ballscrew actuators used on motion simulators were experiencing excessive vibrations at certain speeds, loads and extensions. The vibrations could be felt within the simulator and compromised ride quality.

Testing alone would not identify the root cause of the vibrations but simulation alone could not be undertaken due to there being unknown parameters (e.g. stiffness of bearings and screw-nut interfaces).

The approach which was adopted was to use combined dynamic and static testing and finite element analysis. Carefully configured tests were used to identify properties which could not be deduced from design drawings. Using these properties, a finite element model of the actuator was developed using mass, beam, shell and spring elements and the results validated against additional test results.

The combination of test and simulation enabled an FE model to be created which could be used to predict dynamic response. The model highlighted the design problem, which was eradicated by means of a modification and no resonances occurred.